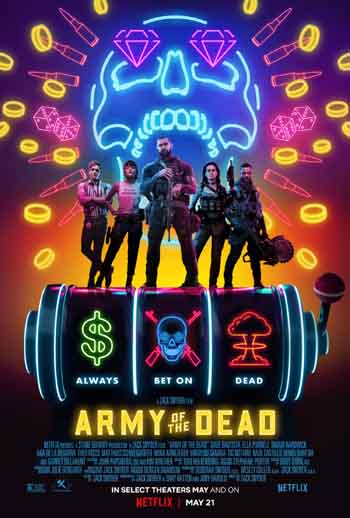 There’s no need for a Snyder cut of Army of the Dead. This is a Zack Snyder film through and through; it’s easily his best work since Watchmen (2009) and enough to win over the majority of stubborn Snyder skeptics. I should know because I was one of those skeptics, at one point believing him to be on the same wavelengths as Michael Bay.

Truly, you should bet all in for a good time because Army of the Dead is a riotous, gratuitous, gleefully over-the-top zombie/heist thriller overloaded with guts, gore and panache. The plot is also irresistibly ludicrous. Think Aliens or Ocean’s Eleven with zombies and you’ve pretty much got the gist.

Dave Bautista (finally the leading man) and his rag-tag team have a 32 hour window to retrieve $200million from a casino vault before an outbreak-ravaged Las Vegas is blown to smithereens by an atomic bomb. But as you’ve probably guessed already, Bautista and his comrades bite off a little more than they can chew when the escape plan goes terribly wrong…

A little like Bautista and his crew, AotD also bites off a little more than it can chew. After a strong opening sequence followed by the first explosion clocking in at three minutes, pacing issues give way to a convoluted introduction of many thinly veiled characters. It’s also about 20 minutes too long. However, you’ll probably be having way too much fun to even notice or likewise care.