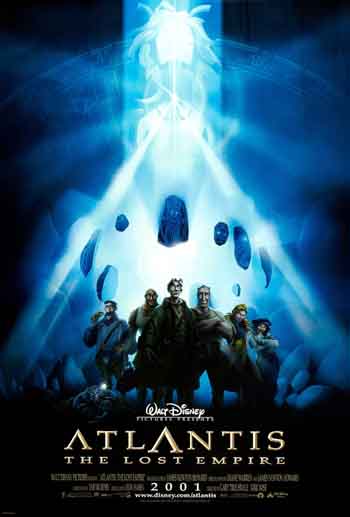 So I had the privilege of attending last night’s New York City premiere of Disney’s new feature lenght film “Atlantis: The Lost Empire”. It was my first premiere and I loved it! It was such a thrill.

Now, onto the review. Disney is taking a huge chance on this movie for a number of reasons. First of all, it is NOT a musical. Much of the Disney name is based on the legendary soundtracks. Initially, I thought that the lack of music would make the movie seem a bit longer and not so Disney. But after seeing it, I thought that the absence of music was a great move. Even though I love such classic songs as “Under the Sea” and “A Friend Like Me”, music might have made it a bit too kiddy. Nice job Disney.

Secondly, this movie is PG. It is NOT G and with good reason. There is a good deal of action (and those scenes are better than any part of “Pearl Harbor”). The partially CG, partially animated “Star Wars”-esque dogfights and chases truly are breathtaking, even to an adult. Yes, this movie might frighten some small kids, especially the scene with Leviathan and some of the climactic rumble(s). But overall, the kids in the audience weren’t too frightened. The nice mix of humor for kids (and some for the adults too) helped to keep the balance of intense action and light hearted fun.