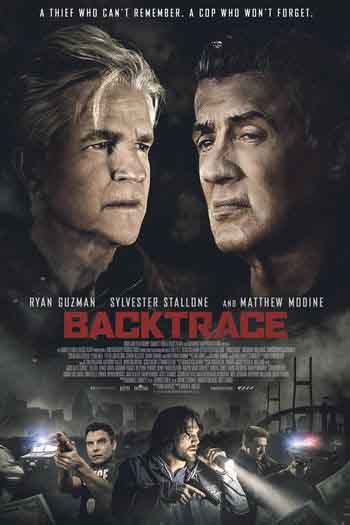 Story… The lone surviving thief of a violent armored car robbery is sprung from a high security facility and administered an experimental drug.

So at the store last week and along with getting Avengers Endgame on Blu Ray I noticed a pretty new action/thriller with Sylvester Stallone and Matthew Modine called Backtrace. But you know something is wrong when the film is less than a year old and the Blu Ray is already in the bargain bin. The film is just a very boring mess that run 82 minutes (without credits) and still could have been at least 20 minutes shorter.

The plot has a thief (Matthew Modine) and a few other criminals getting shot down by their partners. Modine survives but looses his memory. Seven years later 3 people break him out of a high security facility and put experimental drugs in him. Most of the film is watching Modine have painful flashbacks and looking for bags of money. We get some scenes of Stallone in random cop exposition scenes. But most of the film is just boring scenes of them looking for bags of money. Very little happens in the film. There is two shootout scenes but nothing that exciting. The whole film lacks in every department especially in character development. This is Stallones worst work.