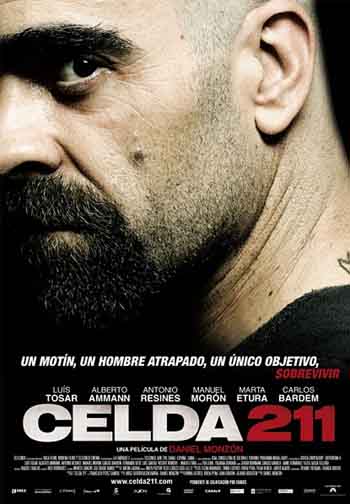 This movie likens that of a gemstone- raw, real, unique, crafty and incomparable. I watched this movie, my first Spanish movie in cinema, with English subtitles and frankly, i was impressed. Though now the only regret i have is not mastering the language before the show. If only i could pay more attention to the movie instead of the translated words running at the bottom.

This is a story of a prison guard, Juan Oliver (played by Alberto A) who decided to go to work one day before he actually begins to ‘make an impression’. What awaits him later is a riot, which forced him to be locked in Cell 211 after suffering an injury to his head. He knows the only way to live is to be one of them, and so he acted as an inmate. But until when can he keep it to himself? He has to make peace with the rest of the inmates and gain the trust of their ‘leader’ Malamadre (played by Luis Tosar) as they take hostage of high profile, terrorist-prisoners. He later learns an ugly news of his pregnant wife outside prison and his life is never the same again.

This movie plays around the humanity of man and how corruption and distrust can affect a man’s freedom and ultimately, his life. There were moments in the show. Obviously, the prison riot. The police riot scene later was well delivered straight to its core, which led to the falling domino pieces in the movie. The turning point of Juan’s character was when he received the news about his wife. Fine acting by all the cast with amazing characterization, awesome cinematography and directing at every scene!