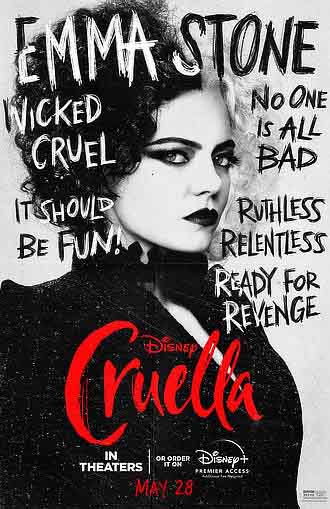 I never thought that I would say the Glenn Close version would be better than this but here we are. Emma Stone has done some fun films and she has some range but in this film she doesn’t add anything, but it’s probably because of the horrible screenplay and story.

First, why was this made and second, disney continues its nose dive into poorly made films. The only real thing about this film is how much product placement and high dollar clothes it shoves in the audiences face! That’s basically what disney has become, whether it is bowing before China, pushing identity politics, or preaching how great greed is! There is no heart and if Walt was alive he’d be mighty upset.

I’m actually surprised at how many high scores this has received, it’s like an episode of the Twilight Zone. Has the bar for bad movies fallen so low? The film is frantic, the story is very loose, and when you think it will settle down you get pop music at every turn.

Save yourself time, money, and brain cells by avoiding this film. Watch the classic 101 Dalmations animated film and maybe you’ll remember what disney once was.