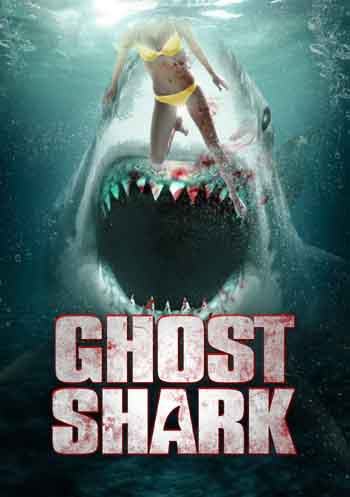 Story… When rednecks on a fishing trip kill a great white shark, its spirit comes back for revenge, and soon turns its sights on the town of Smallport.

Another one of those gut-wrenching horrible, but oh-so-fun-to-watch, bad monster movies from the SyFy Channel. This time it is a shark that comes back as a ghost to wreck havoc and terror on a small coastal village.

Yeah, that was basically the storyline here. And seriously, who comes up with these ideas. It is so far fetched that it is actually hilarious to watch, and the storyline is so bad that you can’t help but take the entire movie to be nothing more than a spoof.

A group of rednecks are out fishing when they catch a great white shark. But unable to haul it aboard their fishing vessel, they decide to kill the shark using a gun, a crossbow and a hand grenade. Mortally wounded, the shark swims off to an ancient cavern where it finally dies. But the mysterious runes on the wall in the cavern bring the shark back from death, returning as an undead ghost shark with a ferocious appetite for human flesh. With its newfound ghostly powers, the shark can appear anywhere that has water – be it fresh or salt water (oddly enough!).

The effects in “Ghost Shark” were laughable, as with most movies from the SyFy Channel, but still, it is enjoyable, because the story is so out there. And there were some really hilarious scenes where the shark gobbles up people or maul them. Watch it for yourself, trust me, you will be laughing hard at times.

The acting in the movie was actually quite good, and I must admit that it was Richard Moll that initially lured me to this movie. But it turned out to be yet another of those goofy SyFy movies that you just love to hate and won’t admit to have fun watching.