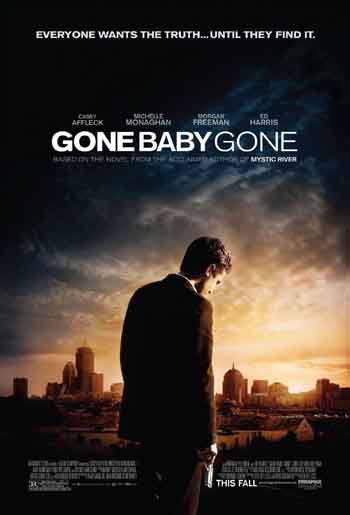 It is now largely forgotten that Ben Affleck’s big break was not as an actor in but as a writer of “Good Will Hunting”. His career has never lived up to the promise of his performance in that film (a quiet and subtle display) and has been overshadowed by the success of his friend and co-Oscar-winner, Matt Damon. With “Gone Baby Gone”, Affleck moves back behind the camera, directing and writing, whilst his brother Casey, who really impressed in “The Assassination of Jesse James by the Coward Robert Ford”, takes the lead.

The film is a gritty thriller at first, with a quite masterful opening which is engrossing and effective. The sense of location is evident from the start and both Afflecks demonstrate their talents. Casey is an interesting screen presence, and Ben is an unfussy director with an eye for location and images.

The film is served well be the stellar cast. Ed Harris is very good, as is Michelle Monaghan and the Oscar nominated Amy Ryan is fantastic, whilst Morgan Freeman is Morgan Freeman, which is nice. They do make the film easy to watch, even though the subject matter, focussing on child abduction, is difficult to deal with.