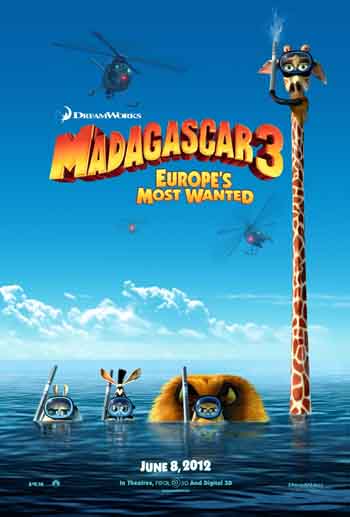 There are eager animated film franchises that rehashed the same old themes and gags in all its installments, and deservedly crashed under its own repetitiveness. Think Shrek, which started brightly, but with each sequel the grumpy ogre and his friends started to become cheap parodies of themselves. There are other film franchises that grow from strength to strength though, such as Ice Age where we get to go on an incredibly long journey with its characters trying to survive the inevitable change and extinction, and then there’s Madagascar, with Europe’s Most Wanted surprisingly having a lot more to offer than what it had suggested.

We go back to where we last left off, rejoining Alex the Lion (Ben Stiller), Marty the Zebra (Chris Rock), Melman the Giraffe (David Schwimmer) and Gloria the Hippo (Jada Pinkett Smith) who are still in Africa, but getting homesick and yearn for their lives back in New York. So they hatch a plan to regroup with the Penguins, who had left with the Monkeys in their flying machine to Monte Carlo and its glitzy casinos, and compel them to take everyone back to New York.