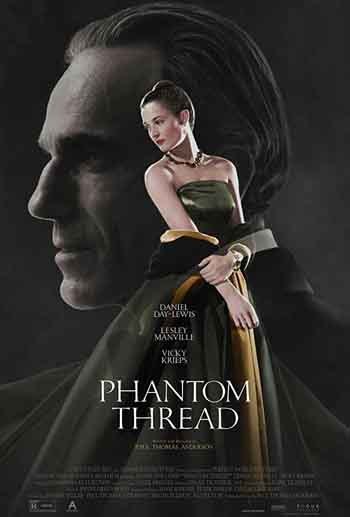 Story… Set in 1950s London, Reynolds Woodcock is a renowned dressmaker whose fastidious life is disrupted by a young, strong-willed woman, Alma, who becomes his muse and lover.

I found this film to be totally mesmerizing, however, viewer beware. If you didn’t understand Luchino Visconti films such as The Leopard, The Damned, 1999, or the Conformist, you may as well skip this. Anderson has created a fascinating and wonderful work of art here which many may not get. I have just watched it for the second time. It takes patience and respect and empathy to fully understand, however, you may find that if you give it a chance you just might find yourself being intellectually ravished. When I finished watching it the first time I found I was limp as if I had just done mental gymnastics for a good two and a quarter hours. Finally, someone has made an art film. It has been a long time coming. I hope Paul Thomas Anderson has another in the works sometime sooner than later.

It had one of best music scores. I think screenplay was amazing. Editing was top notch. Camera was rolled at all beautiful angles. Story was engrossing. Acting was captivating. Direction was enthralling. Tone was just and apt. Hardly a movie rates high on all so many levels. This individual and technical superiority of all departments was blended into somewhat messy but mostly scintillating piece of cinema. With minor faults here and there but overall a joyous expierience of almost perfect cinema.