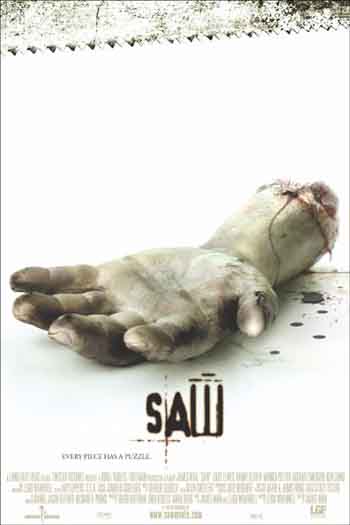 Not since Se7en’s John Doe has there been a serial killer with such a bizarre philosophy behind his actions (not that Jigsaw actually kills anyone; more on that later). Sure, in light of the increasingly deteriorating sequels it’s hard to think of Saw as little more than a franchise- starter (something the writer and director never planned), but viewed on its own, astonishing merits, it’s a good, nasty thriller, filled with solid scares and (especially compared to the follow-ups) quite well written.

According to the film’s notorious back-story, it took only 28 days to shoot it. Not that strange, given most of the action takes place in just two locations: one is a bathroom where Adam (Leigh Whannell) and Dr. Lawrence Gordon (Cary Elwes) fins themselves with their feet chained to the wall, with no recollection whatsoever of how the hell they got there; the other is the lair of the mysterious Jigsaw, a serial killer whom Detectives Sing (Ken Leung) and Trapp (Danny Glover) have been tracking down for weeks.

The two facts are linked in a most ingenious way: Jigsaw doesn’t really kill anyone, but “plays a game” with his victims. In the case of Adam and Dr. Gordon, as the tape recorder found in a dead man’s hand tells them, each of them has two hours to free himself and kill the other, or they will both die. Problem is, the only way to get rid of the chains is to saw your foot off. And so, while the two unfortunate cell-mates have to choose who gets to live (that’s Jigsaw’s perverse logic: he offers you a choice), the police close in on the elusive psycho, whose previous deeds and MO are shown in flashbacks.