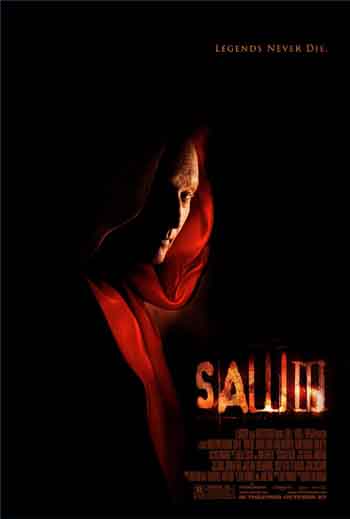 SAW III in my opinion is tied with the original as the best in the series. For many reasons- one reason being that it keeps it simple. Instead of dealing with multiple characters that sacrificed any kind of character development like in SAW’s II, IV, and V, SAW III, like the original, has much fewer characters, leading to a more intimate setting where we can connect to everyone. And while it does have sub-plots, they don’t feel out of place, they’re not just randomly thrown in to shock audiences. They feel organic, they all connect smoothly at the end and make sense as to why.

If you’ve seen a SAW film, you know the story is going to have twists, turns, and violence/gore to accompany them. But at least SAW III does it very well. It expands on characterization and back stories for these characters and ties up the loose ends as believably as this franchise can do. We also get a deeper look at the relationship between Jigsaw and Amanda, knowing more about how the two really look at each other. Jigsaw is the calm, cancer-stricken anti-hero who does these evil things to prove a moral standpoint.

Amanda, on the other hand, doesn’t seem to grasp this – instead using the traps to torture her victims as a way to get back at innocent people for the way she was tortured herself with suicidal tendencies and drug abuse. With these two extremes, we see how much Jigsaw is trying to mentor her in his vision while she struggles with her own demons. And when Jigsaw gets ill, we see that Amanda really isn’t a fitting apprentice to carry on his legacy as her vindictiveness comes out.