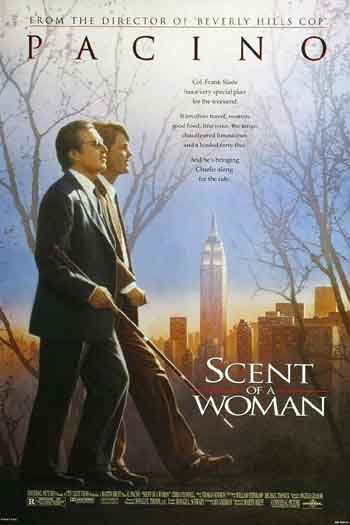 Story… A prep school student needing money agrees to “babysit” a blind man, but the job is not at all what he anticipated.

Al Pacino won his first and only Oscar for “Scent of a Woman” in 1992 and he deserved it far more for “Glengarry Glen Ross,” released the same year. Although he yells a lot in both pictures, the over-the-top screaming was justified by the character in “Glengarry Glen Ross”; in “Scent of a Woman,” his Lt. Col. Frank Slade comes across as a gross caricature, sort of like Robert De Niro in “This Boy’s Life.” Both terrific actors made some mistakes in the 1990s: This was Pacino’s largest in my opinion.

First of all, like De Niro in “This Boy’s Life,” Pacino’s fake accent is constantly varying from scene to scene. He’s supposed to be from the south and has that southern twang in his voice, and pronounces words “lak dis, y’know.” (In fact, he says “y’know” a lot in this movie.) The problem is that the accent comes and goes; sometimes Pacino’s got it down-pat, and at other times we feel as though he’s playing another character. The end speech in particular careens from Louisiana speech patterns to New York City, y’know.

The movie starts off fair enough but it’s so sappy and oozing with cheesy sentimentality that, by its finale, I felt as if I’d seen enough and wanted to turn on something else.

Because basically I’ve seen something just like this before. It was called “Dead Poet’s Society” and it followed the same formula, and carried the same sentimental goo as “Scent of a Woman.” Chris O’Donnell delivers the best performance of his career, and outstages Pacino. But the movie — clocking in at nearly three hours! — really falls apart in the last act.