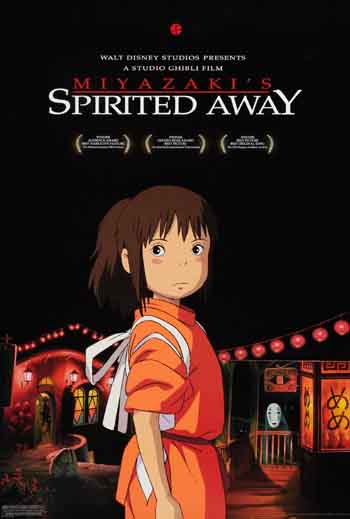 Good morning. Last night I was able to catch the Disney US Release of Spirited Away ( originally The Spiriting Away of Sen and Chihiro). This is another Disney purchase of a Japanese hit. For those that don’t know, Disney has a nasty habit of importing titles from Japan and then changing the story when dubbing films or creatively editing the endings or plot to “suit American audiences”. Personally I think that’s a travesty. So whenever you go see the Disney release of a foreign film, realize the film you are watching may not be the ‘same film’ the rest of the world sees.

OK, that aside, was it a good film? I deliberately did no research before seeing this film as I prefer to go into films with little or no expectations. All I knew was that the film was directed and written by Hayao Miyazaki, the same man responsible for Princess Mononoke ( a film released a few years back that I also enjoyed). In the case of Spirited away, I’m glad I did not know what I was getting myself into, otherwise I might not have come (and surprisingly, not for the reasons you likely assume).