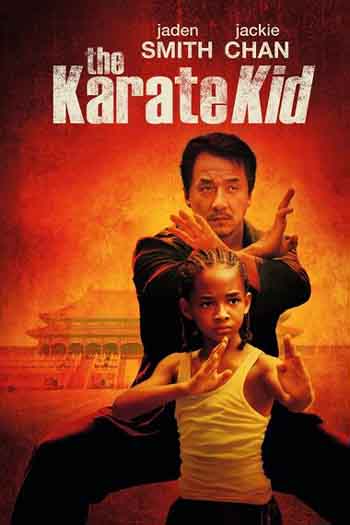 Story… Work causes a single mother to move to China with her young son; in his new home, the boy embraces kung fu, taught to him by a master. Unfortunately for me, I saw this “Karate Kid” movie before I saw the original masterpiece. After seeing the originals and seeing this one again. I’m in a loop. I know I saw this one first, and Jackie Chan is an excellent casting choice. But I don’t like that the movie is a contradiction. What I mean is, it says “Karate Kid” but they don’t do Karate. They do Kung Fu. I know in China it’s called the Kung Fu Dream, but still, that title is irking.

We have an evil karate master, sorry “Kung fu” master whose supposed to be like John Kreese. (But is nothing like the classic villain). He teaches a bully who instantly takes a disliking to Dre, Jaden Smith’s character. By the way Taraji P. Henson does great in this. I’m a fan of hers, and she does fine with this role.

Oddly also, they copied elements from KKII. The Love Story for instance is a mixture of Daniel and Ali and Daniel and Kumiko. I am uncomfortable with Will Smith and Jada Pinkett Smith’s name on anything from the Karate Kid franchise. I know they helped with Cobra Kai, and that show is still great. But when I think of Will Smith doing anything related to Karate Kid. I think of him turning it into Fresh Prince of Bel-Air, a good show, but it shouldn’t be mixed with Karate Kid.