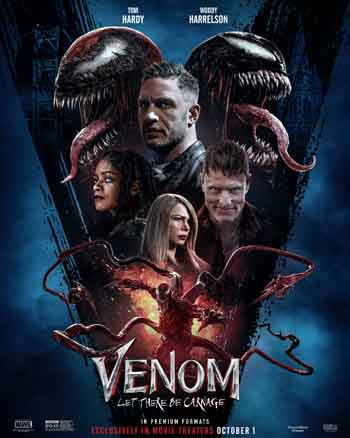 benom 2: Let There Be Carnage

The Animation: I’ll give them props on their design for making the symbiotes come to life, Sony’s latest dive into Venom’s creation is very good. Tight forms, great fluidity of the black ooze that makes him up, and those sensational teeth are perfect for bringing him to life. The movement is fluid, it goes super well during the movement pieces, and the tendrils acting out the comedy moments are awesome. When Carnage appears, that chaotic redness is not quite a vivid as the comics, but definitely has the blood element and chaos of the malicious symbiote. It’s grimy and viscous, and has the sinew of the tendrils that offers a little more of the nightmare that Carnage is known for, including his devilish bladed arms.

The Music: I know a soundtrack for a Marvel movie is not the most noticeable feature, but much like the first film it’s got attitude, beats, and some layers to it. Some symphony work goes alongside the fanfare sound effects to help make the inspiring pieces we love in super hero movies. It’s the rap times though that really work and man are they awesome. Rap beats carry the harder attitude of the Venom world, with that no consequences edge that works to go with Venom’s attitude. The end trailer song was my particular favorite and I liked given the sweet tones of the chorus and the verses bringing the hardcore beats.