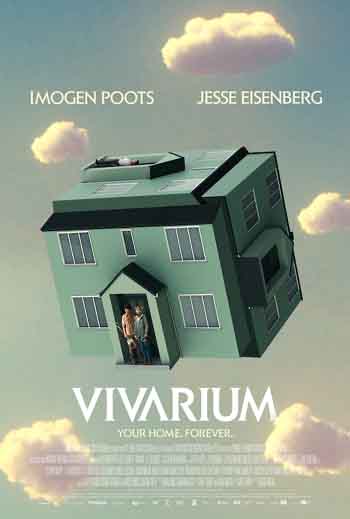 Story… A young couple looking for the perfect home find themselves trapped in a mysterious labyrinth-like neighborhood of identical houses.

Vivarium is a rather ingenious film about a young couple, excellently played by Imogen Poots and Jesse Eisenberg, lured to a bland housing development by a salesman (a hilariously weird Jonathan Aris) where they are forced to raise a child. I really liked the first half, which is a visually striking, surreal existential drama that can be seen as a commentary on suburban life.

At first much of the movie is weirdly, darkly comical, but as it moves along the comical parts give way to despair and horror. This makes sense, and I think it’s a reasonable direction for the movie to go based on its premise. But while the first half is *fun*, the second half is very much not, and that feels like a bit of a bait and switch.

The movie is also, at an hour and a half, too long. It’s basically an extended Twilight Zone episode that takes one concept and explores it. There aren’t really twists per se, we never learn much about this world, we just see how these people’s lives unfold in this bizarre situation.

Ultimately I’m torn between rating this 6 or 7, since parts of it are quite good. But while I was fascinated early on, by the end I was just kinda bummed out.